The funding from Temple Ecclesiastical Charity has enabled us to establish this project as a resource to the people of Barton Hill. In particular during the year Aug 2011 – Aug 2012:

Without trying to seek wider publicity, the Walled Garden Project has attracted attention from across the city and has received two particular awards in 2011.

Bristol in Bloom 2011, gave an award at their second highest level for community projects,  judging the Walled Garden as Level 4 ‘Thriving’.

Bristol Green Volunteers made The Walled Garden their ‘Project of the Year’ and celebrated this with a gift of £1000.

We are very pleased with the progress of the garden and its developing relationship with the local community, in particular, our strong links with local Somali people. St Luke’s Church played a significant part in our first Homemade Festival . Chris Sunderland has contributed to a festival service at Bethesda Methodist church and will be preaching at St Luke’s Harvest Festival service this year. Our Tudor trust funding has assured our work on Wednesdays for three years. Quartet Community Foundation provided funding for the Roundhouse. We are developing applications to establish the work on Fridays through a partnership with Wellspring Healthy Living Centre. After some planning and preliminary work on our part, the Diocese have decided not to pursue rainwater harvesting from the main house. We plan to apply funds remaining from this to other elements of the project.  A website is being developed, and carries information about our supporters. We are grateful to Temple Trust for their ongoing funding of this work. Trustees are always welcome to come and take a tour of the site. 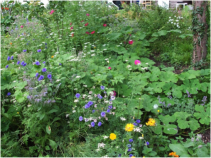